Our website uses cookies to ensure you get the best experience. If you continue to use the site without changing your cookie settings we assume you consent to the use of cookies on this site. I Accept More Information
> Singapore Maths Primary - Singapore Edition>Grade 6>Visible Thinking in Mathematics 5A 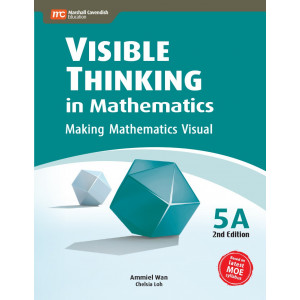 Visible Thinking in Mathematics 5A

Visible Thinking in Mathematics - Making Mathematics Visual.   This is a series of supplementary books that promotes critical and creative thinking in mathematics. It is designed to help make thinking visible by providing the child with opportunities to think, explore and reflect.

While practice leads to better performance, practice without contextual and conceptual understanding prevents the child from thinking critically and creatively. In this series, instead of learning procedures and formulas by rote, the child masters concepts through:

Parallel questions: consecutive mathematical problems with the same context but different key words to highlight differences between problems; ensuring that the child understands and retains concepts and skills better.

This approach not only instills in the child mathematical skills but also inspires discipline in thinking and greater motivation for learning. Additional support is provided to the child through Notes. Notes present opportunities for parents and teachers to clarify misconceptions, simplify difficult concepts and address areas of difficulty for the child.

Chapter 1
Numbers To 10 Million
Number Notation And Place Value
Reading And Writing Numbers In Words
Comparing And Ordering Numbers
Multiplication And Division By Tens, Hundreds And Thousands
Rounding Off And Estimation
Order Of Operations
Word Problems On Four Operations

Be the first to write your review!

28 other products in the same category: